The City of Mauldin’s Office of Cultural Affairs created the Mauldin Public Art Trail in December 2014. This program seeks to beautify the community with public art displays created by South Carolina artists.

The Public Art Trail lines the perimeter of the outdoor amphitheater at the Mauldin Cultural Center. A new work will be commissioned each year to fill the nine pre-approved sites along the perimeter, with the goal that all nine sites will be filled within ten years. For each year after the first ten years, the oldest installation will be replaced, resulting in a new slate of nine pieces of artwork every ten years. Retired artworks will be relocated to other areas around the community.

Each year, the City opens an RFP for interested artists. Selected artists must be residents of South Carolina through the duration of the project. The selection committee chooses two finalists who will then be asked to develop conceptual designs. A final artist will be selected for the project completion. The total budget for the annual program is not to exceed $15,000 and must be inclusive of fabrication, artist fees, and installation.

All questions should be directed to the Mauldin Cultural Center at [email protected] or 864.335.4862.

Below are the current sculptures that line the Mauldin Public Art Trail. Download the map and come see these artworks in person! 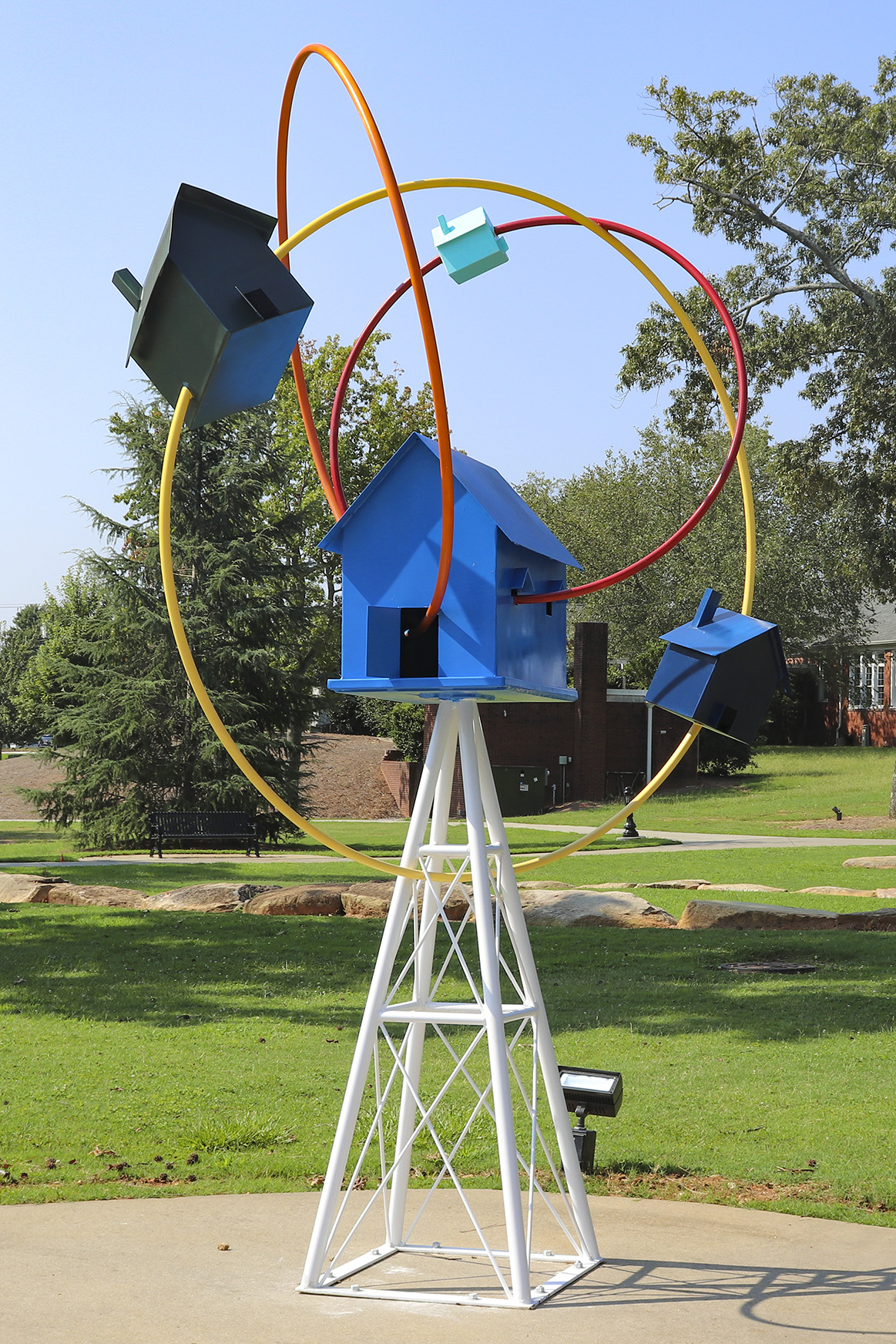 “Community in Flux” by Carey Morton

Artist Carey Morton was chosen to create a piece for 2021’s theme, “Heroes and Leaders.”

The theme “Heroes and Leaders” was selected in the wake of COVID-19. We have seen the terms heroes and leaders be used to describe many groups of people who have not traditionally been given such a title. Across the globe, governing bodies have set forth policies to increase the safety of humankind; healthcare workers have compromised their own safety to care for and save the lives of those infected; manufacturers have grown their production efforts in an attempt to ensure there were enough supplies and medical equipment to go around; innovators and researchers have worked tirelessly to find a vaccination; and individuals have practiced social distancing and isolation to protect the immunocompromised.

Morton’s piece will reflect finding extraordinary in the ordinary, with motifs in his sculpture representing families, a sense of community, and safety. “Each of us embodies a vital cog in the ever-spinning wheels of humanity,” says Morton. “The equal giving of support to our fellow neighbors is the life and strength of the community. From families to towns, from towns to states, and states to the nation. The true hero starts with you and extends to all.”

“2020 has been a year of unforgettable, momentous changes across the world. There have been countless unsung heroes that have risen to the occasion, taking on these new challenges for the benefit of us all. It is near impossible to recognize all of the collective groups that have come to aid. This sculpture is a monument to the individual and their impact on the community as a whole. At the end of the day, no matter what uniform one wears while saving the day, we all go home. It is our actions at home and within the community that ensures we all do our best to care and help each other through the changes of life where heroes are made.”

Carey Morton is a sculptor with experience building steel artworks. Morton earned his MFA concentrating in sculpture from Clemson University in 2018, having completed his undergraduate degree at Winthrop University.

Watch a video on the construction of “Community in Flux” 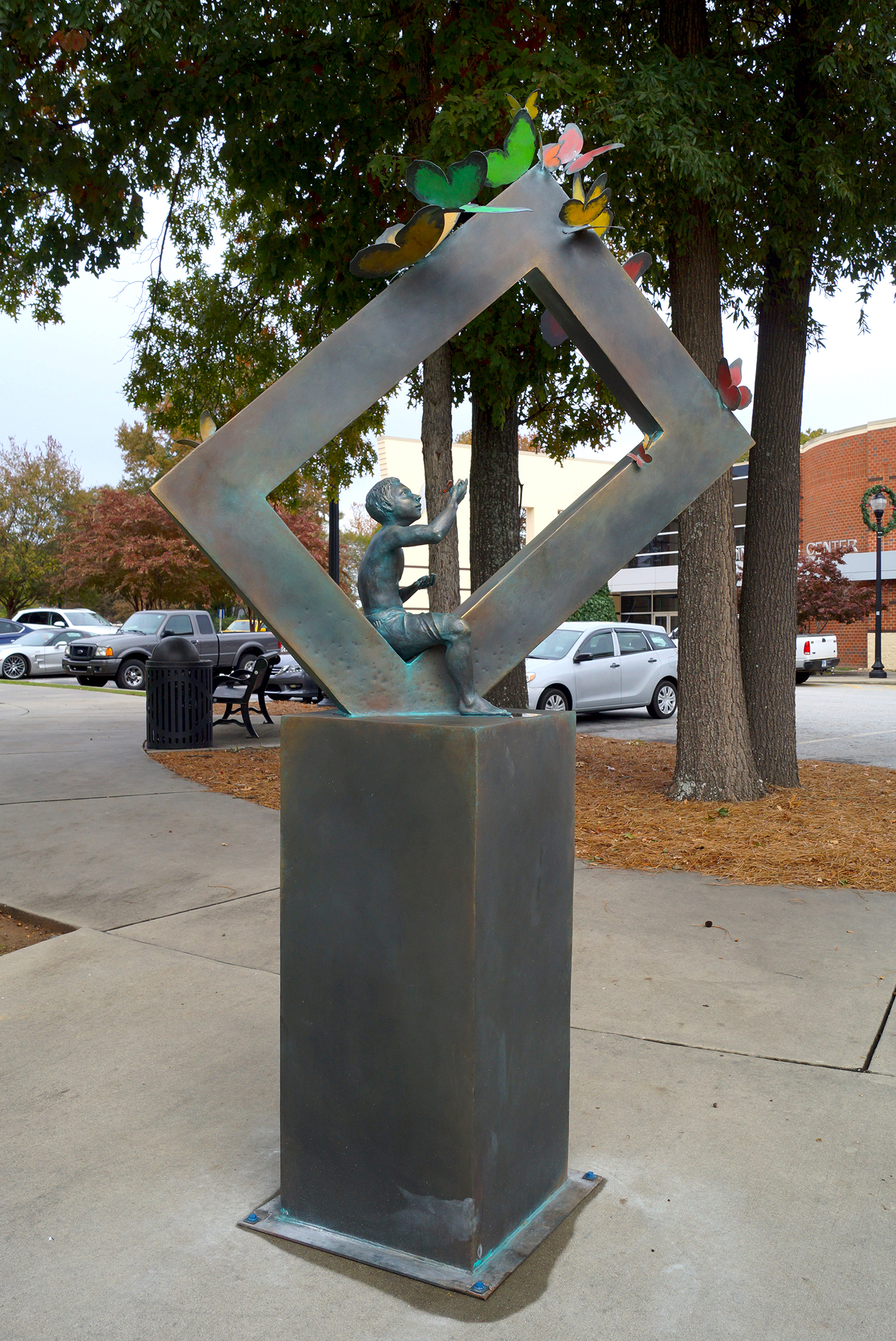 “The Big Cocoon” by Aldo Muzzarelli

Artist Aldo Muzzarelli was chosen for 2019 to create a piece for the theme “Youth: Passion for Change.” This theme celebrates the youth as our future and a driving force behind positive change across the globe.

“The issues that I choose are very optimistic and are almost always related to freedom, equality, the search for changes, the way to transform negatives into positives,” said Muzzarelli during the unveiling ceremony. “In my artistic work the theme of butterflies is very frequent, so much so that in the country where I was born I am still known as ‘the painter of butterflies’. For me, the butterfly represents freedom, continuous change, happiness.”

Muzzarelli’s proposal for his sculpture was to create a piece in which the figure of a child (representing youth) is shown with the cocoon of a butterfly, surrounded by many fully-grown butterflies. The rectangular framework in which the young boy rests represents the barriers that must be overcome by today’s youth.

“Youth, like a cocoon, carries with it all that potential energy necessary for change: the desire to fight, to transform, to face, to fly, to move forward,” Muzzarelli explained. “I hope that the character of the artwork achieves many other connotations. For example, the importance of living in a country like this, where young people have the possibility to choose their future, to select peace. And I mean this because Venezuela, the country where I was born, has been going through a terrible political and social crisis… that has cut the lives of many young people and the freedom of many others. Only education, work, culture, and well-established principles lead to freedom and peace.”

Aldo Muzzarelli is a Venezuelan-born artist who holds a Bachelor of Arts from the Central University of Venezuela. He served as the Director of Culture in his hometown along with teaching at fine arts workshops all over Venezuela. Muzzarelli has created monumental works for the Cathedral of San Pedro in Caracas and opened his own gallery in Tinaquillo. Since immigrating to the United Sates, Muzzarelli has continued his artistic pursuits and has won awards and recognition while participating in exhibitions around the world.

Watch a video on the construction of “The Big Cocoon” 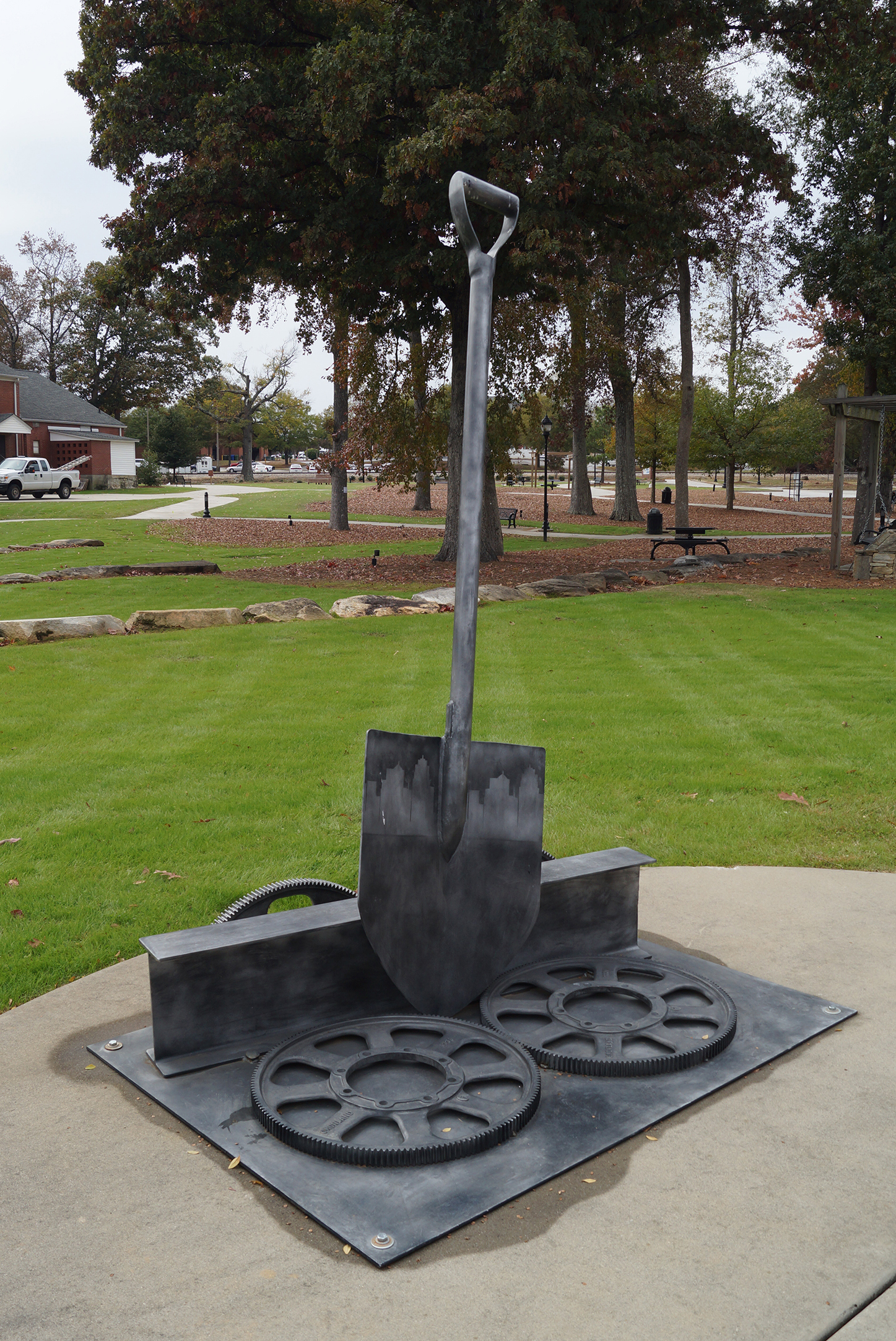 “The Groundbreaking” by Arrington Matthews

Arrington Matthews of Lyman, SC was chosen for 2018’s theme “Industry of the Upstate.” His sculpture, entitled “The Groundbreaking,” exemplifies the theme by portraying the ever-changing face of industry — from where we began to where we are heading.

Arrin Matthews has been a metalsmith with John Boyd Smith Metal Studios since 2012, where he designs, creates, and finishes architectural commissions. Skilled in design, welding, forging, and metal fabrication, his work is represented in Florida, Maryland, California, Hilton Head, SC, Savannah, GA, and now Mauldin, SC.

Matthews is also a firefighter with the Mauldin Fire Department. Being an employee of the City, he is intimately aware of the growth Mauldin has seen recently and chose to focus his piece on the City’s industry. 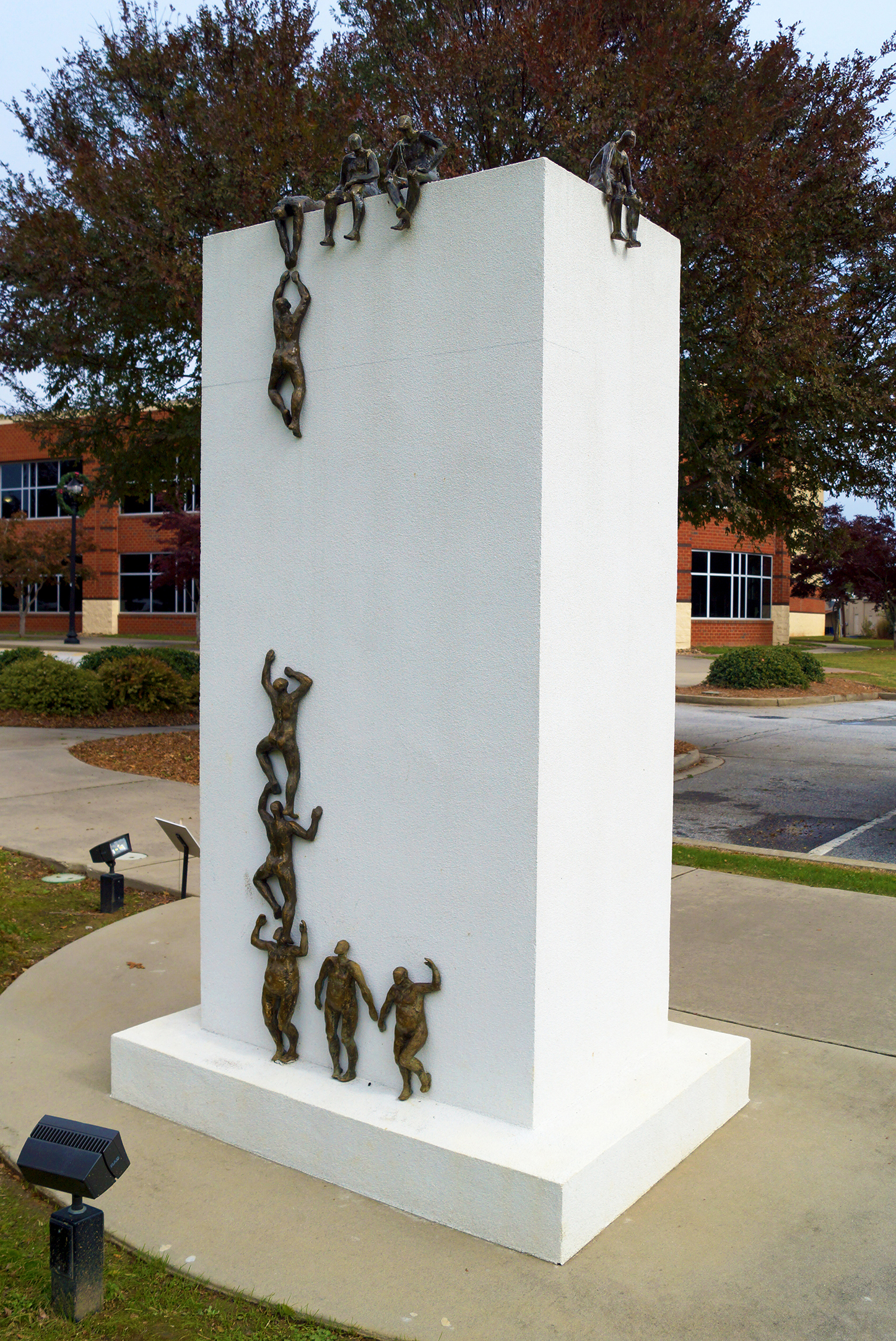 Mauldin, SC artist Yelitza Díaz’s sculpture entitled “We Are All One” embraces the 2017 theme “Appreciation of Diversity,” exalting the spirit of struggle, equality, and reciprocity of the among humans regardless of their differences.

Yelitza Díaz, Venezuelan immigrant and longtime South Carolina resident, specializes in sculpture, winning awards in national and international fine arts competitions since her youth. She has worked in art history and arts education, as well as cultural promotion in her home country of Venezuela.

After immigrating to the United States, she has continued her artistic work in South Carolina with her own gallery, Muzzarelli-Díaz-Art. Her works are represented in galleries and collections throughout Venezuela, Europe, and the United States.

Passionate about the human figure, Díaz makes her sculptures with mixed media techniques, minimalist-contemporary styles, and a clear inclination for human existentialism. Her work aims to reflect the hopes and deepest thoughts of the human being.

Watch a video on the construction of “We Are All One” 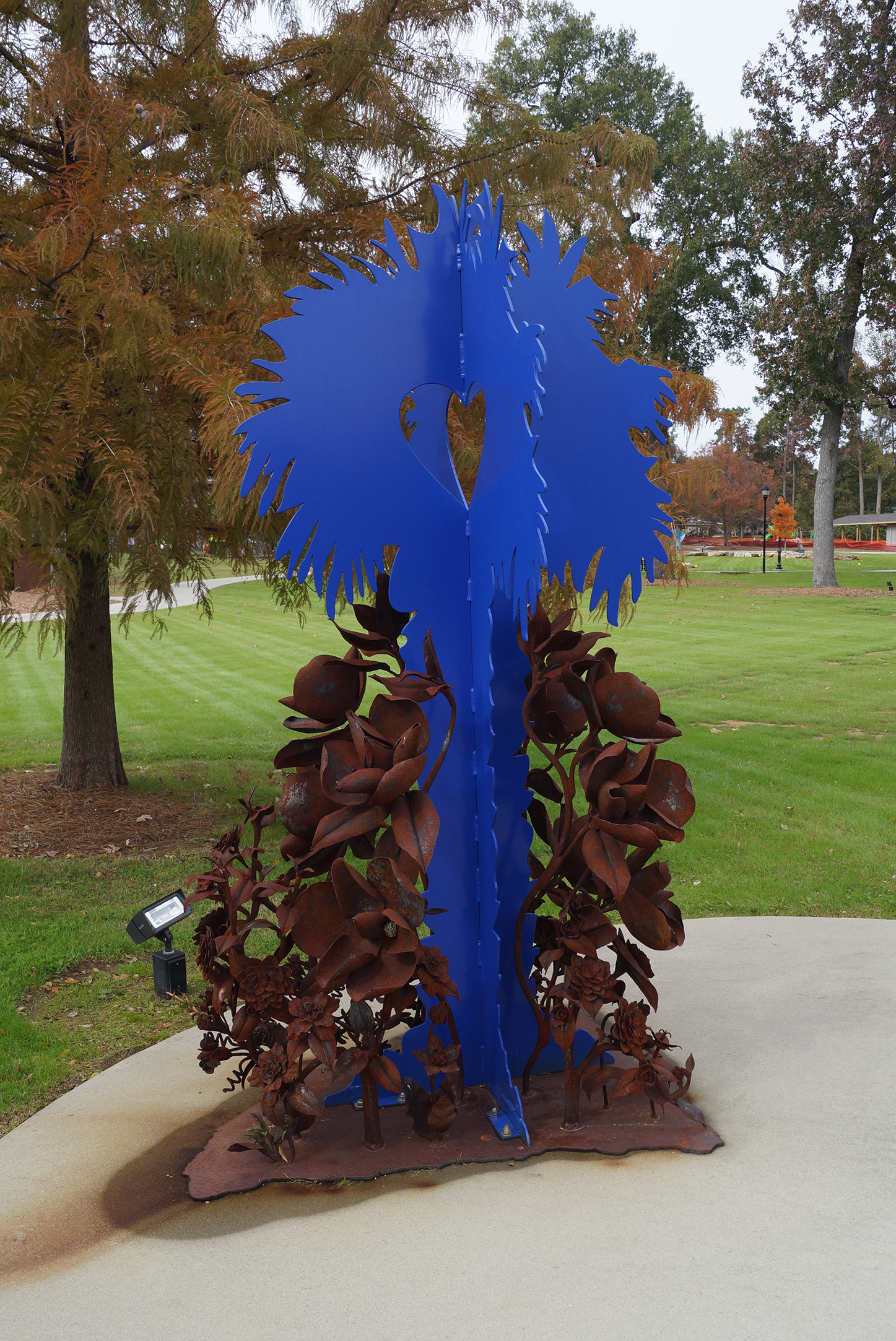 Swansea, SC artist Jamie von Herndon’s sculpture entitled “Palmetto with Flowers” was selected for the 2016 addition to the Mauldin Public Art Trail. The sculpture embraces the theme, “South Carolina Strong”, a nod to the resilience, strength, and unity of South Carolinians during the tragedy at Emanuel AME Church in Charleston and the 2015 statewide flooding.

Jamie received a Bachelor of Fine Arts in general studio with a concentration in sculpture and a minor in painting from the University of South Carolina in 2007. In 2010, she earned a Clay Spencer Certificate in Traditional Joinery from John C. Campbell Folk School. 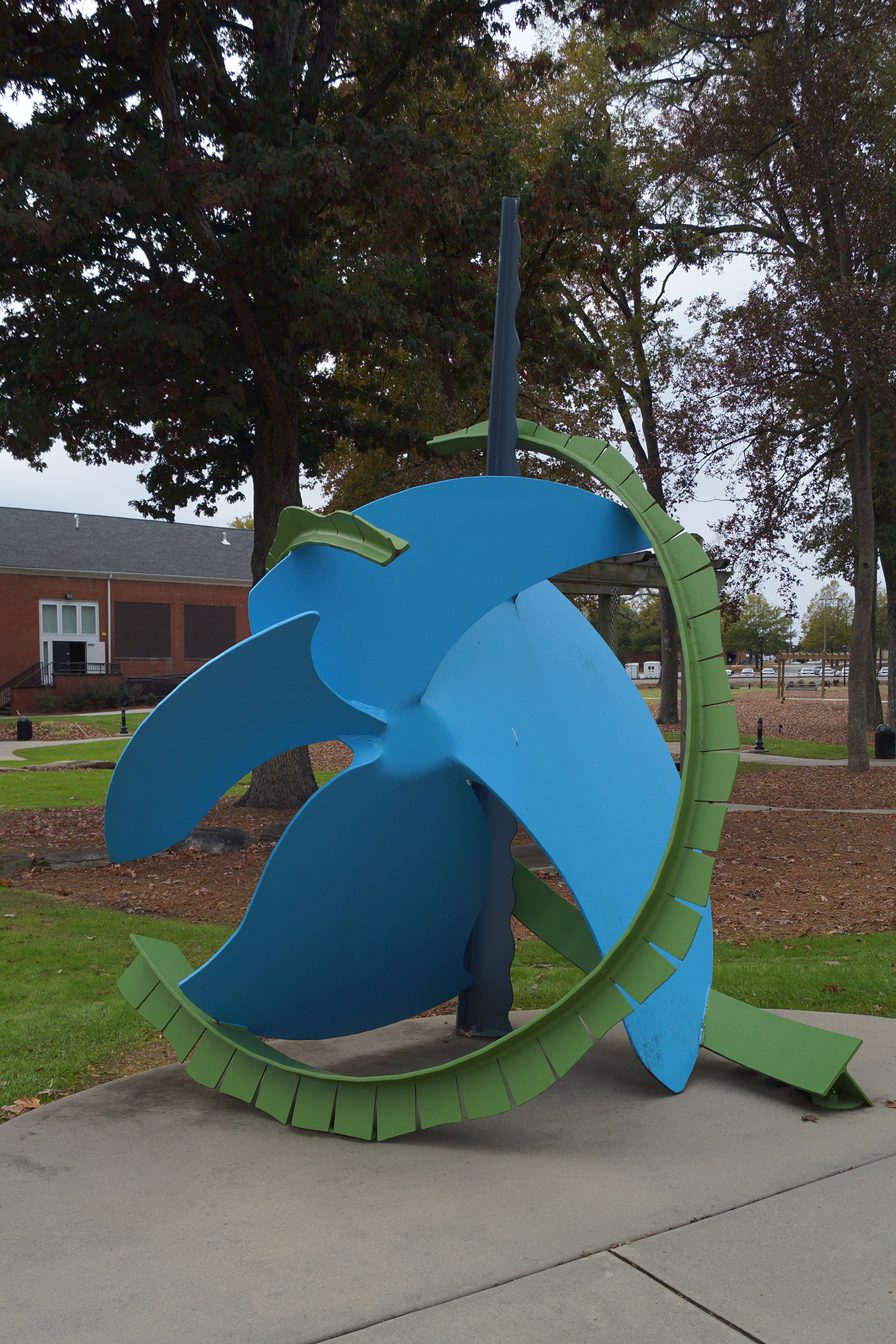 “The Depot” by Joey Manson

Through research, Manson discovered the history of the Mauldin area including a map describing Mauldin’s historical borders drawn as a circle with a 1/2 mile radius centered on the original train depot. Interested in the circular border and the crossroads formed by 107 [East Butler Road] intersecting with 276 and the railroad, he also found the shape to resemble that of an impeller or a propeller, an object of great importance to the economy of Mauldin over the years. They were first found producing power from the river at nearby mills and then during WWII powering airplanes at [Donaldson Center] Air Force Base.

The theme of crossroads thus led Manson from the roads and railway that first gave rise to Mauldin to the modern industry and development that encircles Mauldin and drives today’s economy.

He added the curved, green beams to symbolize these dynamic forces that surround and connect Mauldin today. The grey beam represents the railroad, still present and working, running straight through town.

Joey Manson works with industrial materials to depict his surroundings, abstracting today’s technological and natural environments. His sculpture becomes an exploration of the world’s built, social and environmental constructs.

He has held exhibitions across the United States and currently has commissioned works on display throughout the Southeast.

Watch a video on the construction of “The Depot”