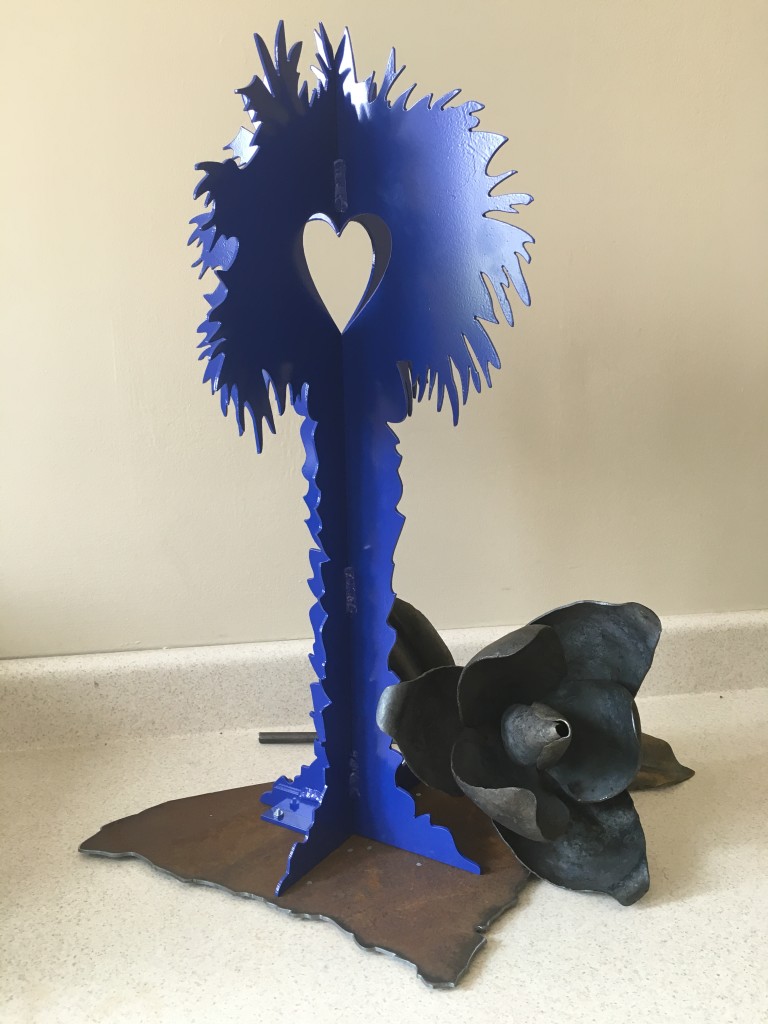 MAULDIN, SC – The City of Mauldin’s Office of Cultural Affairs is proud to announce the selection of the second installation along the Mauldin Public Art Trail.  Swansea, SC artists Jamie von Herndon and Jeff Hatfield’s sculpture entitled “Palmetto with Flowers” has been selected by the Mauldin Cultural Council and approved by the City and will be fabricated and installed over the next few months.

The sculpture, pictured above, embraces the theme for this year’s selection, “South Carolina Strong”, a nod to the resilience, strength, and unity of South Carolinians during the tragedy at Emmanuel AME Church in Charleston and flooding statewide in 2015.  As the artists state in their description of the artwork,

In memory of the Charleston tragedy and the overall theme of strength and resilience shown by South Carolinians during the recent flood, Team H proposes to use the South Carolina palm tree adorned with handmade blacksmithed flowers, leaves, and stems centered on a steel base. Symbolic colors such South Carolina Royal Blue and red oxide will be used to represent the history of the state, the flowing waters of the flood, and blood respectively. Nine Magnolias will be emphasized (Location, color, size, etc.) to represent the nine lives tragically lost in Charleston. These Magnolias will be the largest flower used with other native flowers on the base of the sculpture surrounding the tree’s trunk. The blacksmithed vegetation will be left unpainted so they will rust. The rust will be a symbol for the blood that has been shed during the Charleston tragedy. Rust will grow on all of the un-coated steel structures and will be allowed to flow down the sculpture and the surrounding concrete base to the ground over time.

The artwork is the second iteration of a public art program in Mauldin approved by the City in December of 2014.  The Mauldin Public Art Trail is an annual program that will feature nine unique pieces of public art situated around the perimeter of the Mauldin Cultural Center’s outdoor amphitheater that are replaced every ten years.

A new work is selected each year by the Mauldin Cultural Council, a nonprofit arts organization that supports artistic efforts around the community and at the Mauldin Cultural Center, to fill one of nine predetermined slots around the amphitheater.  After all slots are filled, the oldest piece gets replaced every year and the “retired” artwork is relocated to another area in the community permanently.

“It’s a really unique program that allows us to work with numerous artists from across the state and have them interact with our community,” says George Patrick McLeer, administrator for the Office of Cultural Affairs.  Each year is guided by a special theme and the program is open only to South Carolina artists.

“The selection committee really appreciated the creative approach to this year’s theme. Harkening back to the history of the Palmetto tree and its strength in protecting South Carolinians two hundred years ago, and highlighting its resiliency as a symbol of strength and unity today made this piece stand out,” McLeer said. He added that, “The committee also found it unique and fitting that the nine flowers slowly change appearance over time by having them naturally rust to represent the tragic loss of life at Emmanuel AME Church.”

Once final details are dialed in, including exact schedules, materials, and site preparation, work will begin.  McLeer stated that the target for installation is mid-December of 2016.