The City of Mauldin’s Office of Cultural Affairs is proud to announce the selection of the first installation along the Mauldin Public Art Trail.  Central, SC artist Joey Manson’s sculpture entitled “The Depot” has been selected by the Mauldin Cultural Council and approved by the City and will be fabricated and installed in the next few months.

Manson’s sculpture, pictured below, was developed by combing through the history of Mauldin and embracing the theme for this year’s program, “Crossroads”.  As Manson states in his description of the artwork: 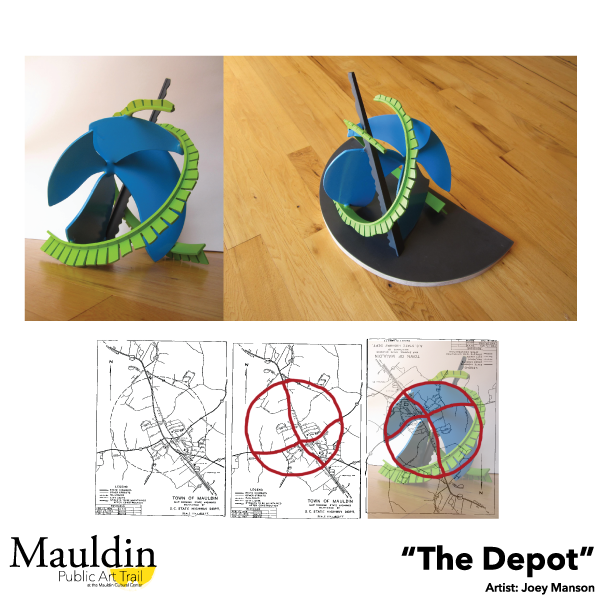 The theme of ‘Crossroads’ led me to research the history of the area and the origins of Mauldin. I discovered a map describing Mauldin’s historical borders drawn as a circle with a 1/2 mile radius centered on the original train depot. I became interested in this circular border and the crossroads formed by 107 [East Butler Road] intersecting with 276 & the railroad. The resulting shape I also found to resemble that of an impeller or a propeller, an object of great importance to the economy of Mauldin over the years. They were first found producing power from the river at nearby mills and then during WWII powering airplanes at [Donaldson Center] Air Force Base. The theme of crossroads thus led me from the roads and railway that first gave rise to Mauldin to the modern industry and development that encircles Mauldin and drives today’s economy. I added the curved, green beams to symbolize these dynamic forces that surround and connect Mauldin today. The grey beam I see as the railroad, still present, running straight through town and still working today.

The artwork is the first iteration of a new public art program in Mauldin approved by the City in December of 2014. The Mauldin Public Art Trail is an annual program that will feature nine unique pieces of public art situated around the perimeter of the Mauldin Cultural Center’s outdoor amphitheater that are replaced every ten years.

A new work is selected each year by the Mauldin Cultural Council, a nonprofit arts organization that supports artistic efforts around the community and at the Mauldin Cultural Center, to fill one of nine predetermined slots around the amphitheater.  After all slots are filled, the oldest piece gets replaced every year and the “retired” artwork is relocated to another area in the community permanently.

“It’s a really unique program that allows us to work with numerous artists from across the state and have them interact with our community,” says George Patrick McLeer, administrator for the Office of Cultural Affairs.  Each year is guided by a special theme and the program is open only to South Carolina artists. “We were very impressed by Manson’s interpretation of this year’s theme and the way he incorporated our community’s history into his work.  We’re very proud and excited to have this piece be the first of many artwork installations to come,” McLeer said.

Once final details are dialed in, including exact schedules, materials, and site preparation, work will begin.  McLeer stated that the deadline for installation is April 2016, before the outdoor concert and festival season starts at the Mauldin Cultural Center, although it is expected to be up well before then, perhaps as early as late-Fall.